One of the houses around here has been purchased by a couple who plan to give it to their son. The son grew up in this economically troubled little town, and lives in Indonesia now. The parents are hoping he'll move back to the old hometown because they bought him a house. They should have bought one-way tickets to Indonesia.

Anyway, Rev. Karen Matteson, the former pastor of the Birmingham Unitarian Church, is the new interim pastor at our local Unitarian church. What a surprise! We cycle around...

Our production of Turn of the Screw is just getting started and I'm quite enthused about it. Rest assured this is not my last mention of this.
Posted by Aaron White at 4:48 PM No comments:

A bit behind the times, but here's a few pix from The Charlotte Heroescon. 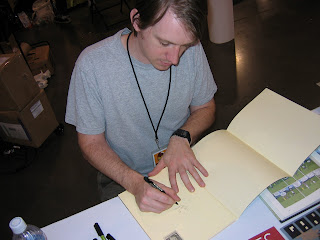 It's Kevin Huizenga, of Or Else and Ganges comics! His blend of Cheeveresque suburban mythologising and Nintendorobic monster faceoffs has made him one of the rising stars of my generation... okay, my brother's generation of cartoonists. Here you can see him drawing me a sketch. Thanks, Kevin! 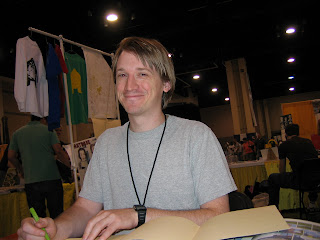 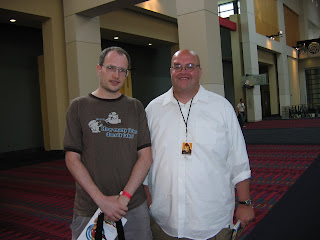 Here I am with Tom Spurgeon, the Comics Reporter. Ever since he was editor of The Comics Journal he's been shaping my sense of how to grapple with art in a personal, even-keeled but incisive fashion. 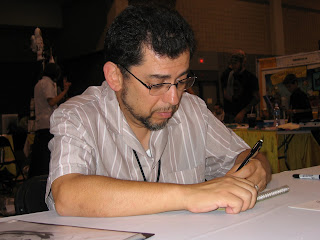 Jaime Hernandez, one of the greatest living cartoonists, period! If you're not familiar with Jaime, go find the Love & Rockets comic book and get acquainted with his and his brothers' cast of characters. He was a joy to speak with; we discussed his roots in punk culture and how that shaped his DIY approach to comic storytelling. He answered my question about how he views Strangers in Paradise, a popular comic that I regard as little more that a tepid emo pastiche of Jaime's work (He sees the resemblance, acknowledges that SiP creator Terry Moore denies imitating Jaime, and shrugs). And... 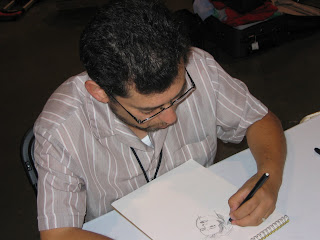 he drew us a picture of Maggie, his main character! 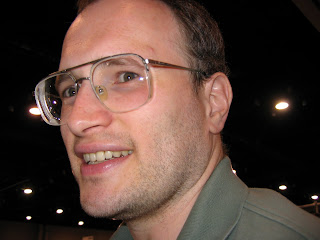 And here's how I felt about that.

Return of the Screw

As a fan of ambiguous, creepy stories it gives me great pleasure to announce that I have been cast in a production of Turn of the Screw! It's a two-person production in which a woman plays the governess and a man plays the other roles. If, like me, you've avoided reading Turn of the Screw because of Henry James' less than breezy prose style, I'd suggest you give it a chance. Cozy up with it on a pleasantly spooky night, and it may stick with you... It actually reminds me of a favorite non-horror film, Last Year at Marienbad, because like that film it opens itself up to multiple interpretations but validates none of them.
Posted by Aaron White at 12:20 PM No comments: 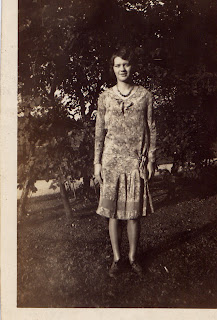 Hours after posting that last thing about my Grandmother, I got a call from Mom telling me Grandma had finally gone to Heaven.

My Mom and Aunts have made a tough decision: Grandmother's long-time assisted living facility is pricey, and at the current rate she'll be out of money in two years. So they've moved her to a less expensive facility where she isn't pampered as much, and her money will last seven years.

Grandma is 97, in cruddy heath, and eager to go be with Jesus. If she had her way her body would have unclasped her soul long before. She doesn't like the new joint; she misses having attendants wait on her hand and foot the way a 97 year old woman deserves. I say let her go back.

If I'm ever in Grandma's condition, leave me in the pricey pamperin' place and send Dr. Kevorkian Jr. around once the money dries up.

Anyway, sorry I haven't been posting: Laurie has been wresting a grant proposal to the ground and I've tried to be a good house husband despite my shaky domestic skills. Plus I've done one audition that went well, and I'm gearing up for more.

I miss all ya'll from the B'ham scene. It's frustrating to go to a show and know I won't see any familiar faces.
Posted by Aaron White at 7:53 AM No comments:

Now I have 2 professional auditions, one this weekend, the next the next weekend. Each show only has one role for an adult male, but they're both openings. Here's hoping!
Posted by Aaron White at 9:03 AM 1 comment:

I got another audition! It's for professional theatre, and it's a semi-long shot, but it's worth a try.

Our garden is a constant joy. We've got a miniature palace of plantlife, and we eat from it every day. I get to fend off critters and enjoy the beauty of this tangled patch. All those computer games I used to play were cheap substitutes for this.
Posted by Aaron White at 11:59 AM 2 comments: