Casual Maxx Squad: Some leftovers from a misspent decade. 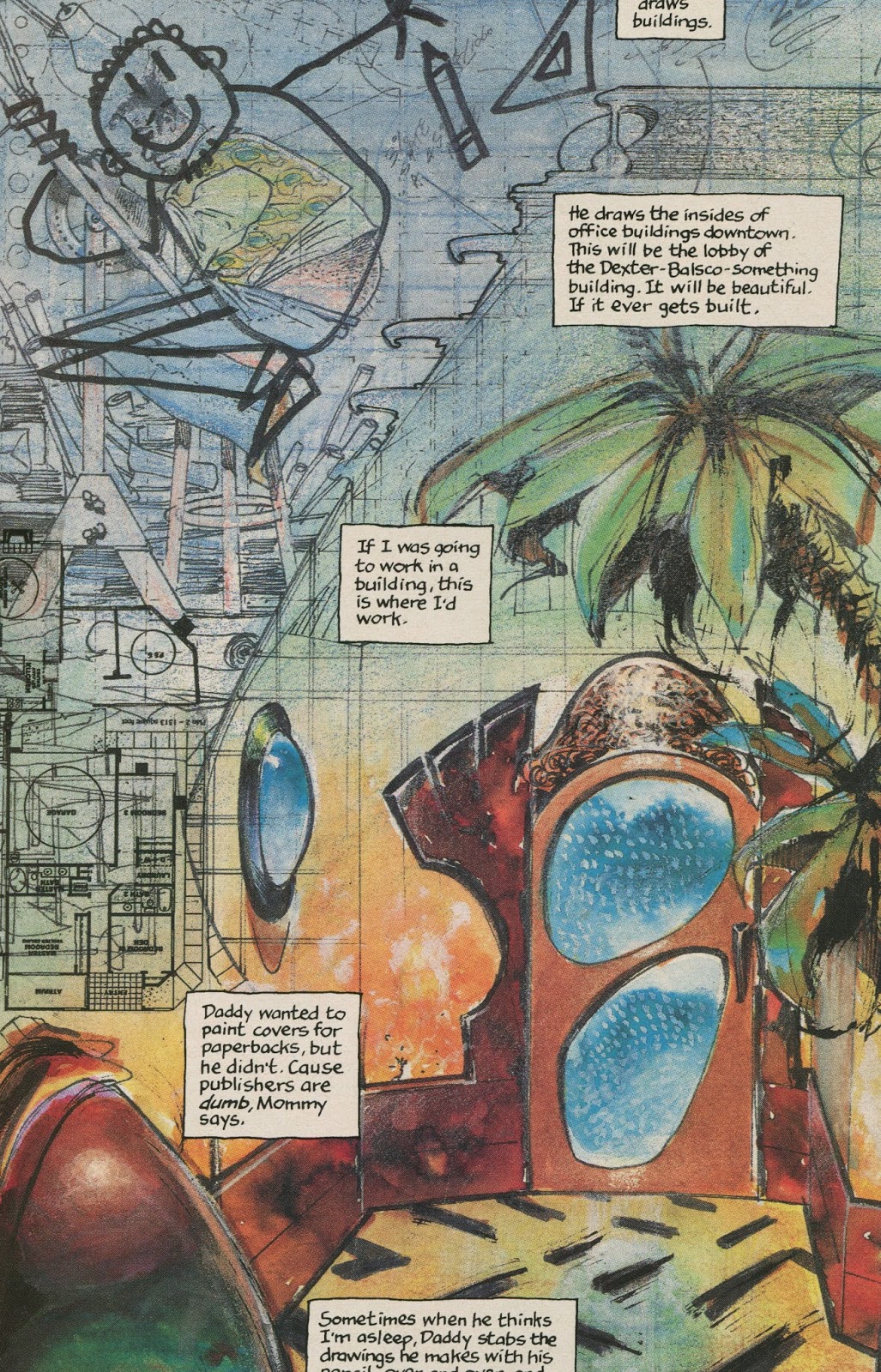 That's from a comic book titled The Maxx, issue #10. It's the first issue I bought; the first comic I bought in my college career. That image tells you why. Lushly pretty, dense, narrative art with a cartoony base. It suggested ways of blending traditional comics and fine art in ways I'd never seen before. Further, the story, despite walk-on appearances by a boo-hiss supervillian and a superhero (drawn in a hybrid of 90s superhero muscle-mass and early-comics bigfoot comedy), focused on a normal girl's childhood trauma, and the way it shaped her as a grownup. This blend of nerd-friendly tropes and Bergmanesque thematic concerns instantly turned me into a Maxx fan. I returned to the comics shop to buy issues # 1-9. Had I been better educated in recent comics nerd material I would have known that the lovely page there was not exactly unprecedented; a fellow named Bill Sienkiewicz had set the example for this kind of cartooning with his Klimt-goes-Pomo art for comics miniseries such as Electra:Assassin and Stray Toasters.  But knowing that wouldn't have blunted my appetite for more Maxx.

So what does that pretty page and that nice daddy have to do with the story?  Not much.  Daddy's of dubious dramaturgical importance to the story:  It's a pretty basic childhood trauma narrative.  Girl rescues crippled bunny, tries to nurse it but it's too far gone, Mommy kills the bunny, and the girl's traumatized for life. 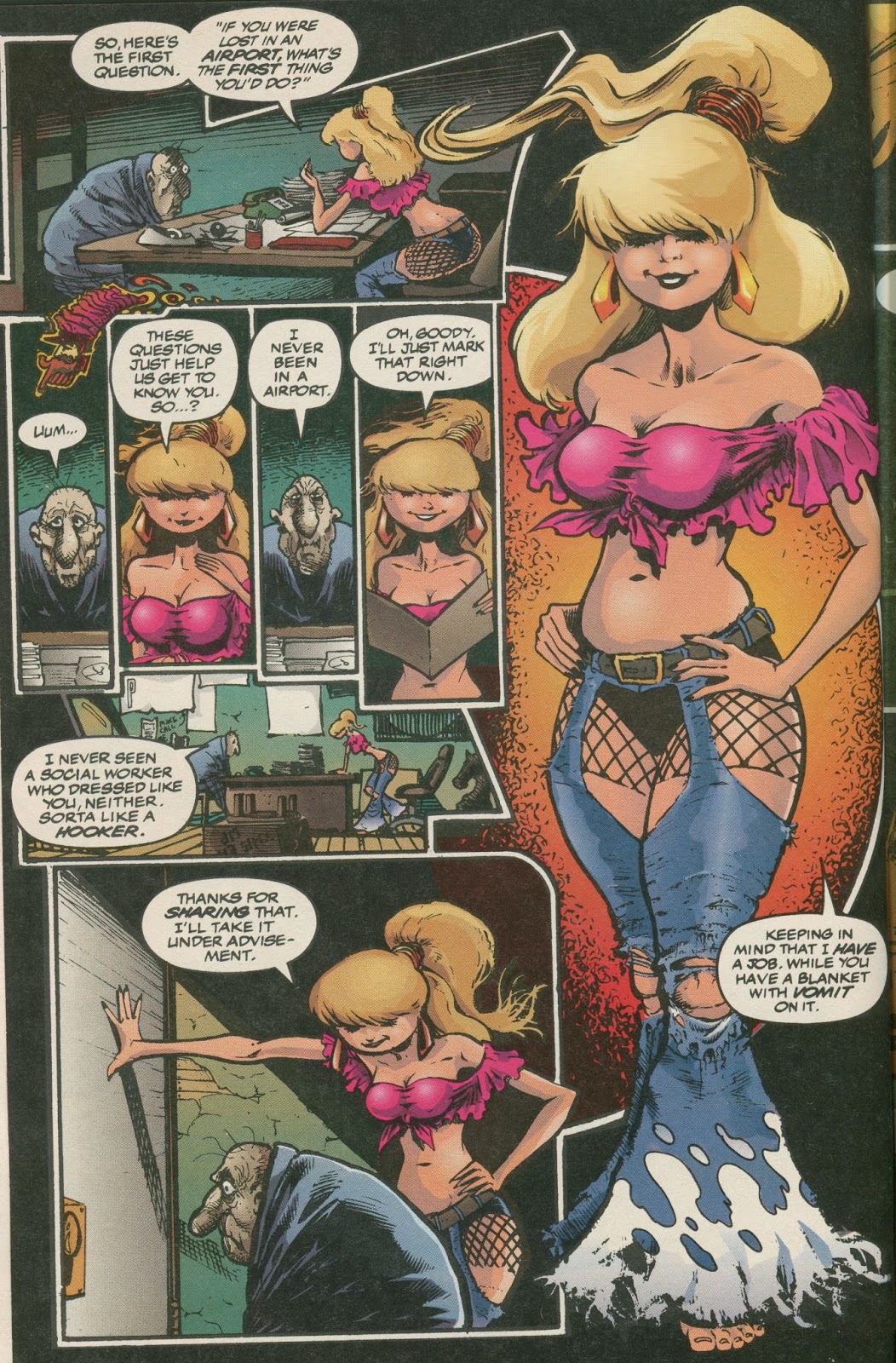 So here's a page from the first issue.  That ridiculously dressed woman is Julie, the adult version of the traumatized little girl in issue #10.  Now, this comic was written by two men: Sam Keith (the artist) and William Messner-Loebs (who's credited with the dialogue).  I don't know what their collaborative process was, but I'm guessing it was "Marvel-style," meaning they talked the story over, the artist drew some pictures, and the writer tried to come up with dialogue that matched/made sense of/made up for the art.  On this page we're confronted with a social worker who, unlike actual social workers I've known, doesn't believe in minimizing sexual cues.  This leaves Messner-Loebs with an interesting challenge; this character clearly dresses the way she does because the artist likes drawing women like this, but if you're trying to create something like a characterization, how do you make sense of this?  By making her nasty, apparently, and not in a Janet Jackson sense.  That blanket crack at the end suggests, if her wardrobe doesn't, that social work may not be the career path for her.  Issue #10, then, is what comics calls an "Origin story," the explanation of how she got this way.  She's afraid of the painful consequences of caring, so covers it up with a bitter attitude. I only have a few issues of The Maxx left in my collection.  I gave most of them away.  Notice that I haven't shown you The Maxx himself yet.  The Maxx is a pseudo-superhero who ocillates between being Julie's Spirit Animal (turns out he's a bunny beneath his mask) or the deluded homeless guy she can't help nurturing (in which case he's a human beneath the mask).  This slippage accompanies Maxx and Julie's vacillation between two worlds: the real one, and the Outback, Julie's fantasy world.  I'll not delve much deeper into that, partly because I don't remember it all, but mostly because Keith and Messner-Leobs were clearly making it up as they went and it ended up a tangle.

Eventually they ended (not resolved) the story, and the comic continued as a succession of minimally connected tales, now written in full by the artist, Sam Keith.  Let's see what he came up with! 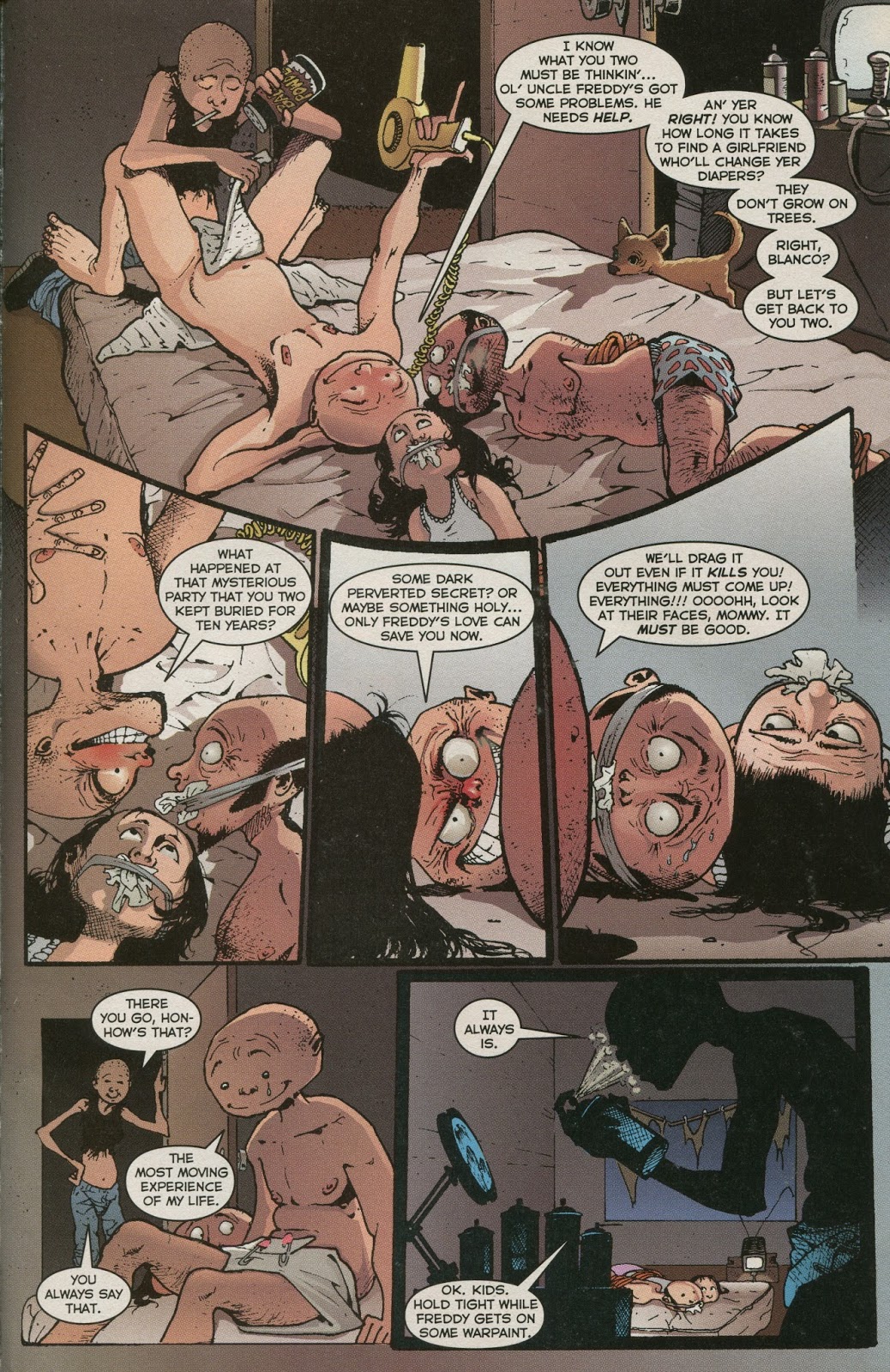 Well alrighty.   15 years later it looks less transgressive, since every free weekly in America features Dan Savage helping people figure out diaper fetishes and related kinks, but imagery like this is still a bit much to take on an empty stomach.  Like the undigested erotic/psychological elements in the first issue, this makes me wonder what the thought process was that produced this, although in this case there's only Sam Keith to credit or blame, since Messner-Leobs had left the title by now.  Sam's put a lot of work into things like page layout; I like the way bodies are juxtaposed and intermingled in threatening/sexual tableaus, but it's unclear how positive or negative we're supposed to be about weird fetishes.  Horror, kink, and bootleg psychiatry in the EST/Dianetics mold come together in a story with none of the comic's original characters at all.  I don't have the next issue, in which this story presumably ends with an induced epiphany on the part of the kidnapped characters, or just an escape from bondage, but either way I doubt it's able to top (or bottom) that page for sheer queasy sleaze that plays on the ambiguous pleasure and terror of BDSM.  So let's skip to the last issue I have, which is The Last Issue. 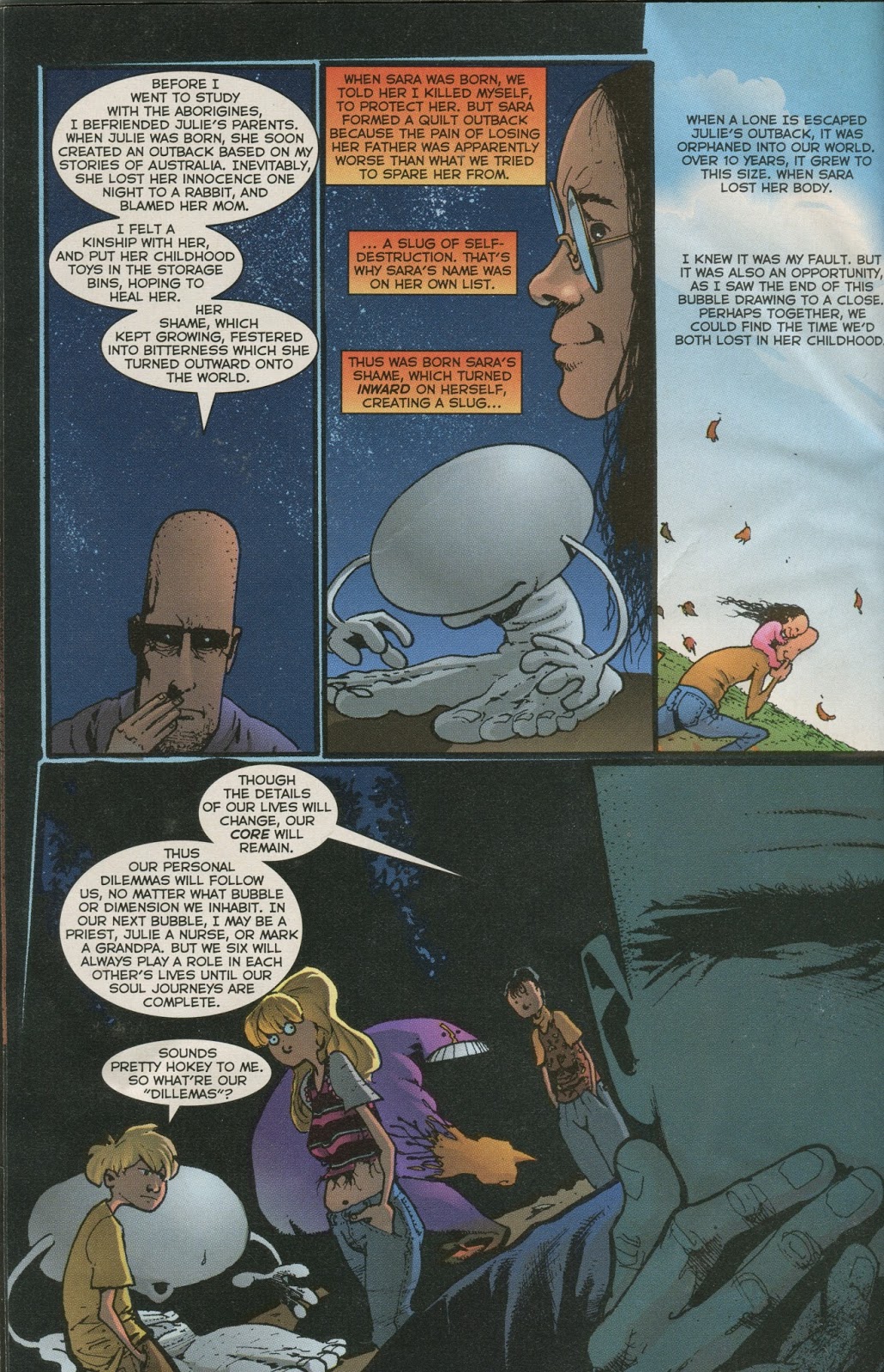 Got all that?  Sheesh, look at that type.  Compare and contrast to the hand-lettering in the first couple pages I posted.  Although I wasn't aware of it at the time, I think the main reason I lost my enthusiasm for The Maxx wasn't because the lumbering improvisation of the narrative kept stumbling (Keith wound up explaining a lot of plot points in the letters pages instead of in the comic proper) or because Keith decided to take over the textual end of writing, or because the main characters disappeared for months at a time.  It was because the letterer quit and got replaced by a font, along with too much text, resulting in big indigestible chunks of wordwordswords.  Kind of like this blog...  That purple guy's The Maxx, btw.  Sometimes Keith drew him big and imposing, sometimes Keith drew him like this.  Maxx is tonally flexible in a way most costumed heroes aren't.

Anyway, the schmaltz of panel 3 is probably indicative of Keith's shortcomings as a crafter of Deep Human Narratives.  Portraying creepy horror/erotica?  He brings it.  Portraying simple happiness?  He falls back on greeting-card hand-me-downs.  This reminds me of the show Lost, which tried to turn its tricksy elements into the backdrop for O. Henry tales of human folly and growth, but lacked enough human insight to pull it off.  Lost's attempts at character-centered drama often left me wondering if the writers had ever actually met a human.

But in a panel here, a page there, Keith's outpouring of lush doodles helped me enjoy the 90s a bit more than I might have otherwise, and Messner-Loebs wrote one passage of dialogue (no longer in my collection, I'm afraid) that still matters, even if paraphrased from memory.  Maxx comforts a teenager (Sara, the brunette in the page above) with the insight that growing up is, in large measure, a matter of learning to manage pain.  That idea helped me through a lot of sorrows and frustrations. 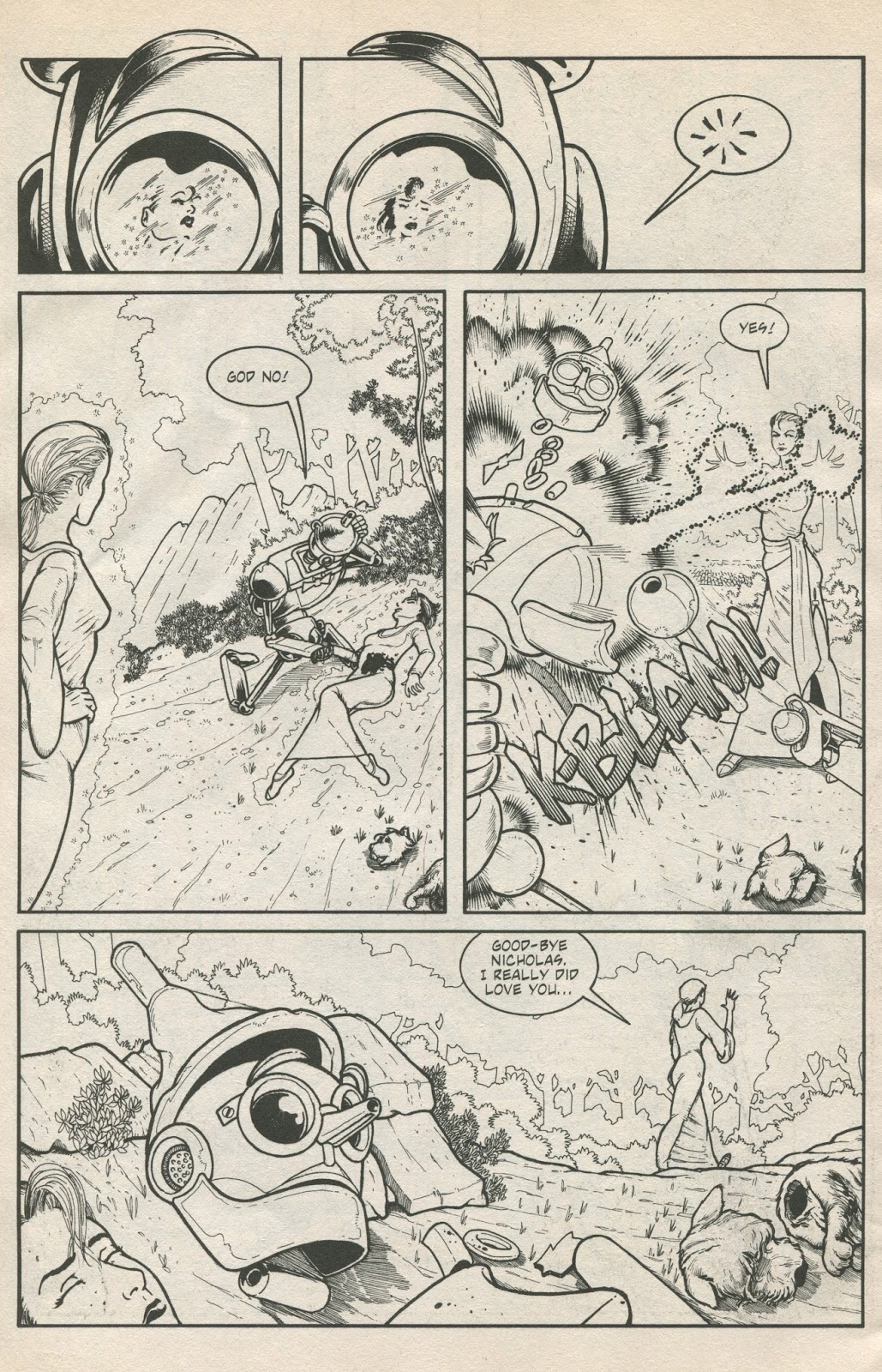 Oz Squad!  Two guys who aspire to pick up where John. R. Neill and Ruth Plumly Thompson left off, (or perhaps March Laumer was more the idea) draw upon X-Men/Teen Titans methodology to plug the gaps in their own youthful artistic problem solving toolkits, and behold the zap-kblam results.  Don't worry, Toto there's a repairable robot dog.  And all ends well, as the following panels make clear: 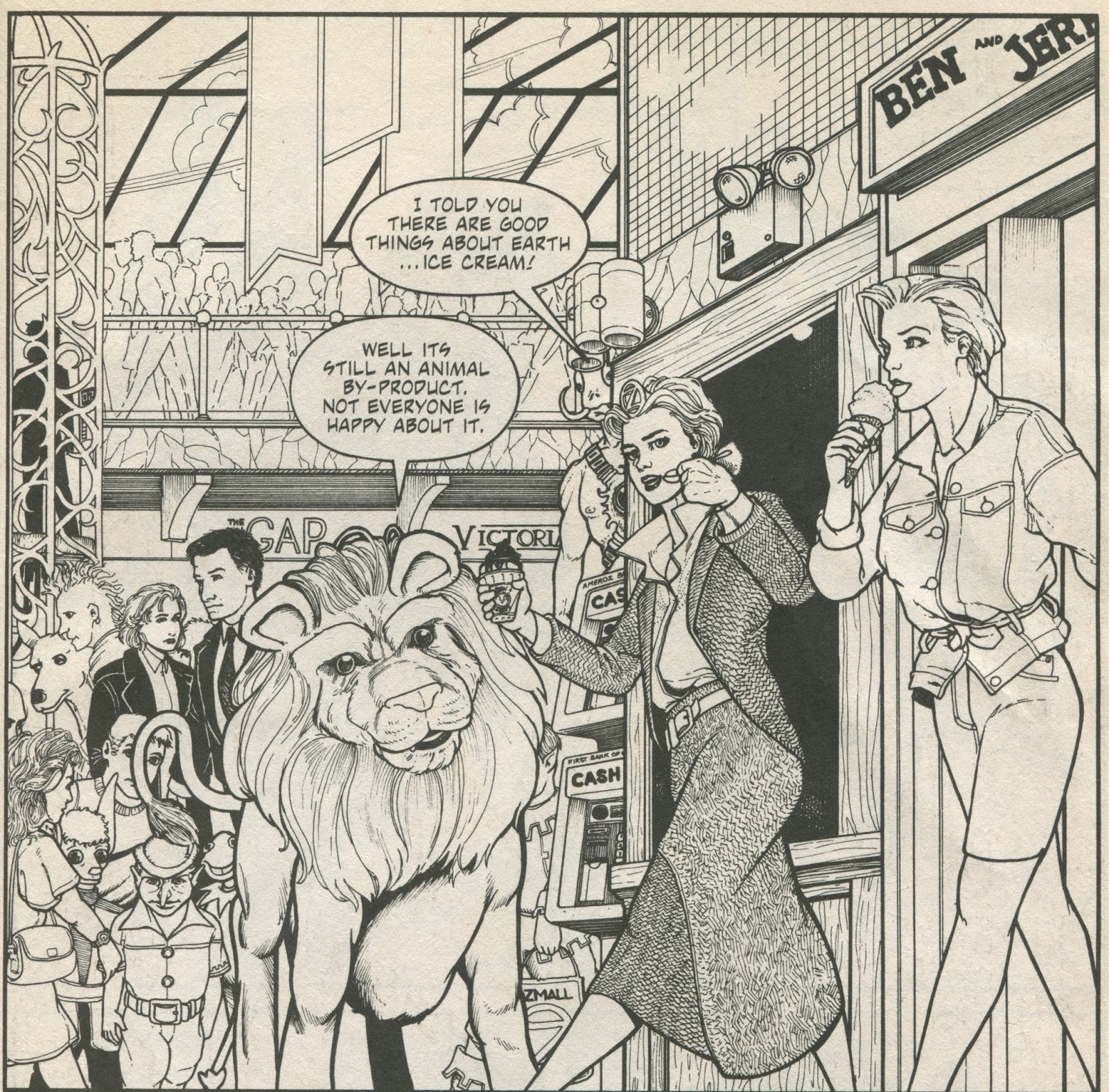 Hanging out at the mall, with big-headed Mulder and Scully (so 90s!) and... some other characters.  What happier ending could there be? 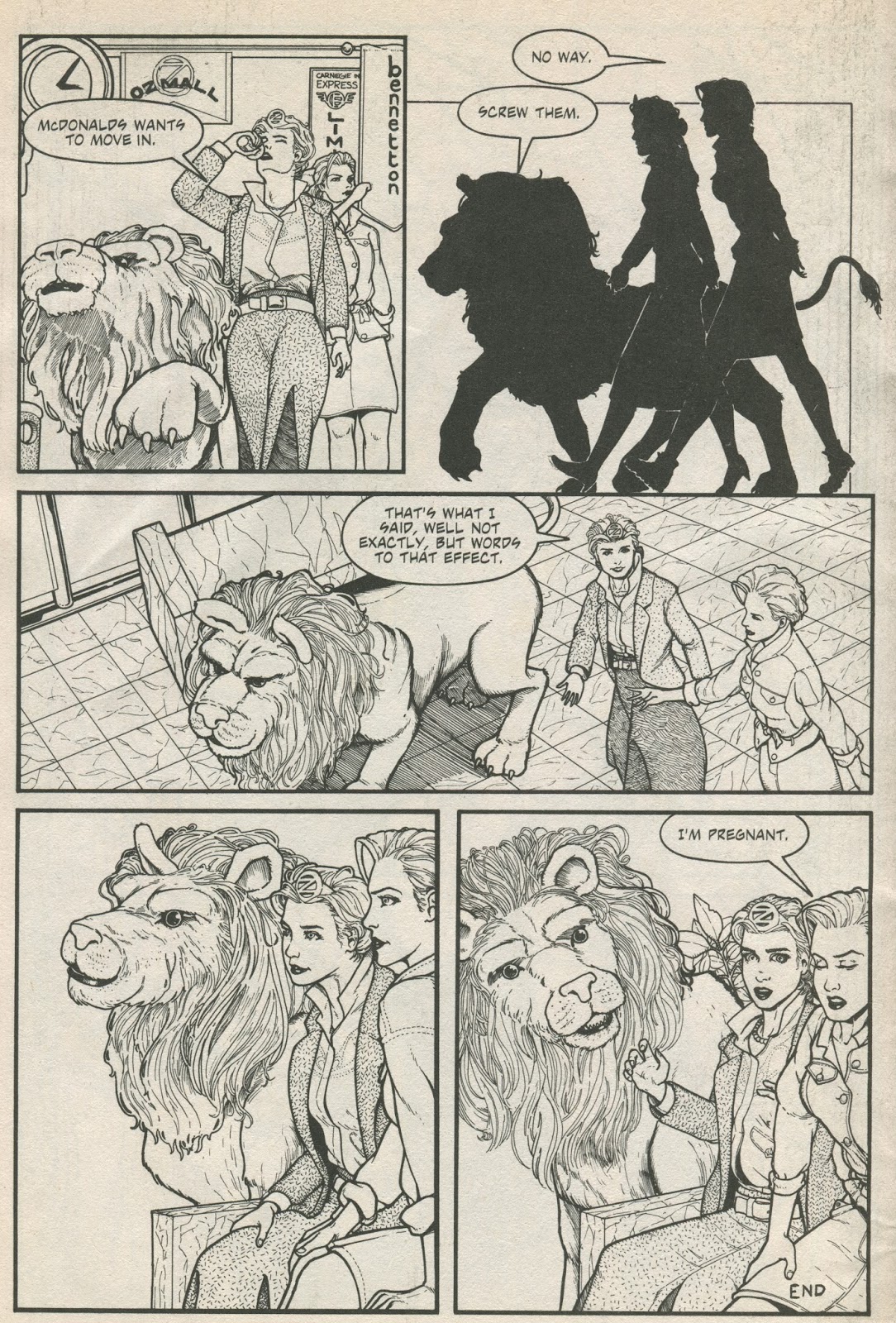 Yeah, suck it, McDonalds!  We're not gonna tolerate some crass corporate entity moving in on our shopping mall.  Oz Mall!  I hate to admit it, but the idea of Oz as a mall probably would have gone down pretty smooth with L. Frank Baum if he'd still been around.

Look at that lion's eyes, particularly in the second-to-last panel.  If I were sitting by a lion, I'd want it to be sedated, but that lion is BAKED.  Just another stoner at the mall.

And in closing, a quick glimpse of Casual Heroes!  As far as I can tell, only one issue ever got published.  And while it's not likely to make any nostalgia-monger's top 100 list, it's one of my personal talismans of 90s-ness. 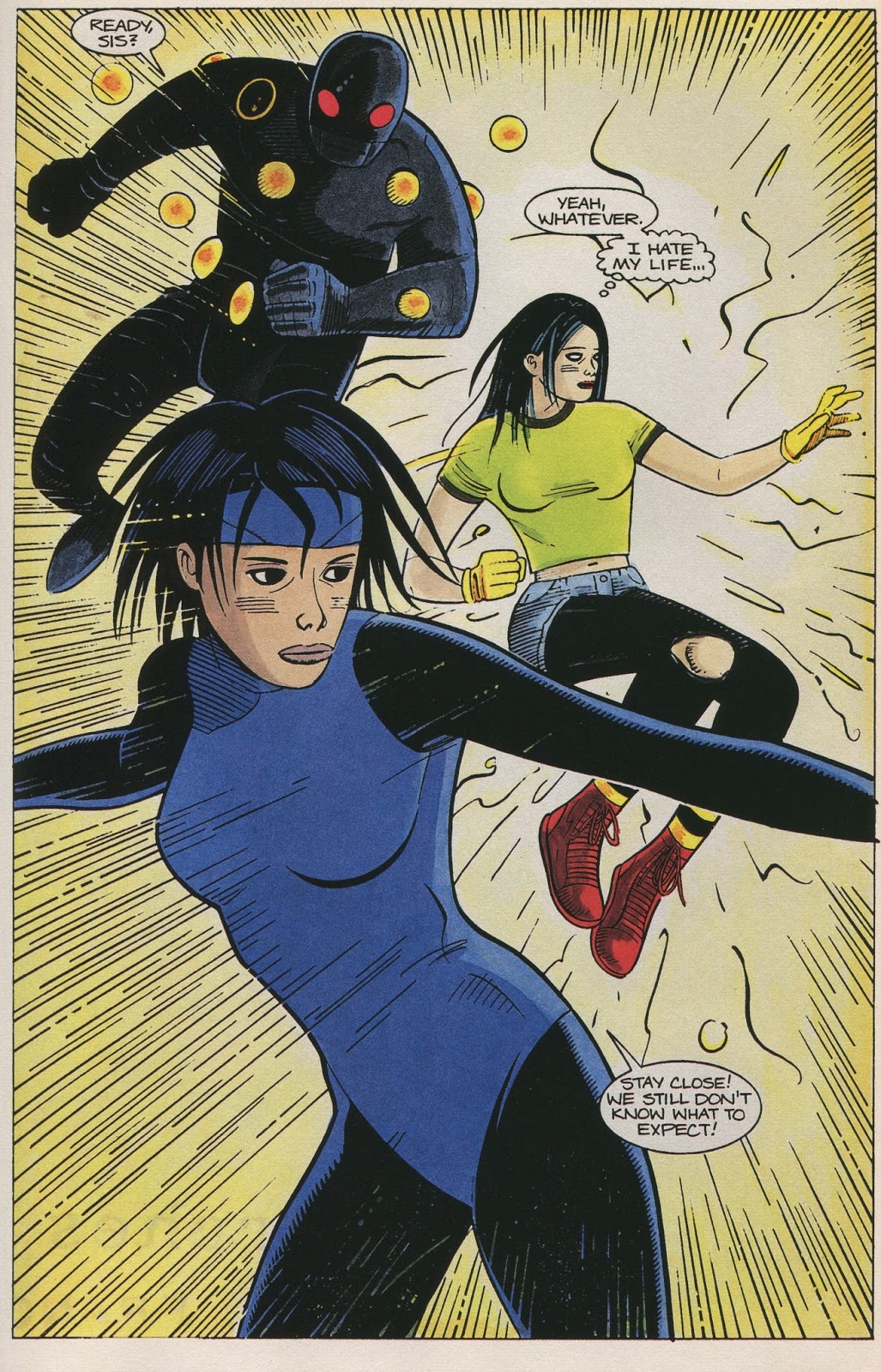 Kirby swipes.  Bold colors.  Ripped stockings and cutoffs.  This utterly derivative title tries to goose typical superhero schtick with slacker banter, and when I close my eyes and think "90s," this is how it looks, only less aggro and no sausage lips.  In the letters page (yes, first issues had letters pages, thanks to friends of the artists) the guy behind this comic talks about swipes (the fine art of copying other artists, like oh say Jack Kirby) the way DJs talk about sampling.  It's a kind of comics bricolage, or could be if it got past this Colorforms level.

I turn 40 in a few days, and this is still what I spend my mental energy on.  Bye now.

Posted by Aaron White at 1:42 PM No comments: