Turn of the Screw opens this weekend! 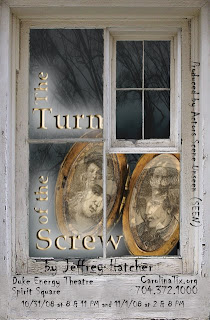 Posted by Aaron White at 6:51 AM No comments:

Some years ago I was cast in an improv troupe. At the time the troupe was engaged in writing a sketch comedy show spoofing TV shows. This was not a concept dear to my heart, but I was drafted as a sketch writer.

My first sketch was "The Malcolm X Files." I know, you're gasping with laughter already, but the hilarity didn't stop there. The story would follow Agent Malcolm X and Agent Skull-E (I know, hilarious) as they track down the truth about the Tuskegee Alien DNA Project. The show would end with a disclaimer: "The United States Government did not inject alien DNA into unsuspecting test subjects at Tuskegee. It was actually syphilis."

I had thought I'd made it clear that the point of the thing wasn't to mock or belittle the victims of the monstrous real-life Tuskegee syphilis experiments, but to point out that the government is the culprit in many conspiracy narratives for reasons of its own making. But clarity within one's head isn't the same as clarity in one's work. Only the troupe's desperation for members (owing to a high attrition rate) kept me from getting the boot.

The show went on with some other corny bits I'd written or co-written, though, to a deservedly lukewarm response.
Posted by Aaron White at 5:01 PM No comments:

Watch Out For Splendour

I met Allison Bechdel and Harvey Pekar on Friday! I'm a fan of them both, but even though they were both really down to earth and approachable I got all tongue-tied.

One cool thing about Pekar is that a couple years ago he got to publish some new work with DC comics, the Batman people. Given this opportunity to connect with a mass audience, he wrote a bunch of stories about unclogging toilets. That's what I call authenticity. I tried to compliment him on this, but it came out sounding more like a complaint. It's hard to compliment someone for writing toilet-unclogging stories.

Allison Bechdel's Fun Home is an extended consideration of Bechdel's father, and we got to talk a bit about the book's spiraling, ruminative structure, which I found spellbinding. She sketched herself thinking in spirals in my book. It's a treat! I felt bad cuz I didn't buy anything (hey, I'm unemployed until November!) but after we schleped the 20-odd unlit miles from the civilized world to Kannapolis, Laurie read my copies of Our Cancer Year and Fun Home, so they've picked up a new reader.
Posted by Aaron White at 2:32 PM No comments:

I've been cast as a caroler/Ensemble Member in the North Carolina Shakespeare Festival production of A Christmas Carol. Which means I've got a job, and I'm making some useful contacts. Moreover, this is my first salaried acting gig ever. I've done a few shows where it was like "You'll get an unspecified cut of the take a little while after the show closes," but now I'm actually getting a specified (small, but living-wageish) bit o' money per week. I'm a pro at last.

The Director called me to give me the good news, and he mentioned that I'm just starting off as an actor. Depends on how you look at it, but I am starting off my real career, and I'm pleased to be working for an Equity Theatre. I expect this'll be a splendid chance to raise my game.
Posted by Aaron White at 5:40 AM No comments:

Some theatre folks in town recently told me about a difficult community theatre production they got hired for in a distant county. They were given some leeway to select the show, and they chose Agatha Christie's And Then There Were None, an old whodunnit chestnut.

The theatre board warned them that they may not get a big turnout for such an avant garde show.

How do you get less avant garde than Agatha Christie? I asked the director of this show "Did you do it in Esperanto, with the cast in animal masks?" She replied "We might as well have."

Anyway, I saw the movie version of And Then There Were None A.K.A. Ten Little Indians a few years back when I was having major mortality issues, and I was appalled. I'd enjoyed it as a child (British eccentrics traipsing about manor houses and such are a childhood favorite of mine) but the film's debonair attitude towards death offended me greatly.

It later occurred to me, however, that most Agatha Christie fans are a lot closer to their natural mortal ends than I am. Perhaps that's part of the allure of Agatha Christie's material... death as a plot point, largely devoid of horror or real significance, may help defang Death Itself in the minds of the fans.
Posted by Aaron White at 6:23 AM 1 comment:

I didn't get the touring company job. The quest for paying theatre work continues.
Posted by Aaron White at 8:12 AM No comments:

They say that folks who listened to the Nixon/Kennedy debates on the radio came away thinking Nixon won. And one day I turned on the radio and for whatever reason the Nixon/Kennedy debate was on... not just an excerpt, but at least a big chunk. I don't know why, but I found it fascinating. Because I came away from it thinking Nixon sounded like a President, while Kennedy sounded like a country club president. But we've all seen the TV images where Kennedy looks like a Greek God and Nixon looks like, well, the sick sad man he would turn out to be.

I only caught the tail end of the Biden/Palin debate on the radio, but it sounded to me like Biden owned it. He was instantly metabolizing the questions and responding with fully formed, astute and experienced responses. Palin sounded like she was reading talking points of off flash cards. She sounded like a dipsydoodle. You know how THOSE Monty Python fans think that obsessively quoting Monty Python confers Python's brilliance upon them? She sounded like she had the same hangup about Reagan.

But now I've seen a smidgen of the TV version of the debate on Youtube. Old Wrinkled Guy Versus Hot Momma. So now I know why some folks give the debate to her.

I don't blame Palin for being who she is, though. As my friend J'mel put it, "Bears chase people. don't get mad at them." It's not her fault for being a poor pick. It's McCain's fault for picking her, or allowing his handlers to pick her. His judgement ain't the kind we can rely on. I have as many reservations about Obama's record and experience as anyone, but he's got my vote.
Posted by Aaron White at 5:06 AM No comments:

Back in Acting Action

Sorry I've been so quiet, but our modem fritzed out. So did my car. So did the economy. All on or around my birthday. Plus I got a sore throat, so if I owe you a phone call, that's why you haven't gotten one.

Anyway, I had a callback audition for a paying Shakespeare gig, and I believe I did well. Trouble is, so did almost everybody else. It was one of those auditions where we're all in the room together, doing scenes together, and we can see who we're up against. I'm up against some remarkable talents, and the director's in the position of choosing which wonderful performers to cast. About twice as many auditionees as available roles, and there seem to be many ways to cast it well. I want it so bad, but I'll understand if I don't get it, even though I think I gave good audition.