Slivers in the Tree

I have a suspicion about abstract art. I suspect it came to prominence in part as a result of the imagery of the microscope and the telescope as it became widely available to the public through, y'know, Life magazine and textbooks. Images of nebulae and microorganisms provided a very different way of looking at the world and its structure(s) than the naked eye could. Most representational art takes a human's-eye-view as the baseline; abstract art takes the telescopic and microscopic views as new baselines. I'm not interested in getting into Sharks Vs. Jets stuff between abstraction and representation, because I value them both, but I think one reason the representational partisans object so zealously to abstract art is that it denies a comfortably human point of view as a sufficient base for looking at the world, and that probably unsettles some people. For some, though, it opens new possibilities. Old-fashioned God-as-man-with-beard art tried to picture God, The Sublime, in humans' eye view ways, which has its virtues and its charms, but Rothko gets much closer to my conception of God.

I'm reading The Wind-Up Bird Chronicle by Haruki Murakami. Apparently it's caused some trouble in a high school lit. class. I'm not deep into it; about 30 pages of a 600+ page book. Still, it's clear from Chapter One that this is going to be an R-rated text. The (married) protagonist is sitting around the apartment, hoping someone will call with a job offer. Instead an anonymous woman calls and starts talking explicitly dirty to him. He hangs up, and the incident bothers him for the rest of the day. The phone keeps ringing, and he refuses to answer; he's too icked out by the first call of the day.

I can see why some people would be uncomfortable with this material, particularly for teen readers. But I can see the possible value of it. What teen can't relate to the your headspace, confusing and frustrating you, icking you out all day. I suppose the student who objected to the book saw the book itself in those terms. But still, the book offers an opening into a serious discussion about these kinds of problems, and advanced students need to get outside their comfort zones in order to address difficult topics. I hope that when the young protestor goes off to school she won't be lost at sea when sexuality gets increasingly persistent in her life, which it will. Maybe she'll remember the book and give it another try then; it contains wisdom from which she would be well advised to learn.

I recently finished Silver On the Tree, the last book in Susan Cooper's The Dark Is Rising series. Computer game nerds have a term for games that aren't open-ended, games in which the player has to go along a predetermined path to complete the game: "on rails." Like an amusement park ride, right? Cooper's plots are on rails. Will and company mostly have to go along till they get to the next hypnagogic semi-interactive showpiece, then let an old guy lecture them on the Matter of Britain symbolic significance of what's happening, then repeat til the conclusion. There's a pair of nice dilemmas for some characters at the grand conclusion, but the climax itself is pretty much a matter of "Then the children hoisted the magic treasures they found in the other books, and the treasures zapped the bad guys with magic beams and the day was saved, then the old guy gave a really long speech about good and evil, the end."
Posted by Aaron White at 8:38 AM No comments:

I Don't Wanna Go Back

I've written before about weirdoes at the laundromat, but as I sit here doing laundry in our own household machines I recall there were many as-yet undocumented but unsettling encounters. It was a 24 hour place, open to all, so all kinds of people showed up. If you were there in the early morning and wanted to have a sexual encounter with a sweaty trembling tweaker you were usually in luck. Not that I ever availed myself, you understand, but they made their presence and their proclivities known.

If you went on a Saturday afternoon you'd always have to contend with the big ruddy guy in the muumuu who didn't wash his clothes in the machines. There was a large sink the custodian washed his mop in; it was always kind of cruddy. And Muumuu Man would dump his laundry in there, pour on detergent, and turn on the faucet. He'd also smoke inside even though there were No Smoking signs everywhere. Once he stood right in front of the only exit, blocking the path with his big circus-tent-looking body, smirking as people tried to get around him. Oh, Muumuu Man.

One night was particularly noteworthy. I put my laundry in the machines and went for a little stroll around the nearby park. It was dark out, and I heard a howling that I took to be a dog. Eventually, though, the howling resolved into a phrase: "I DON'T WANNA GO BACK TO PRISON," over and over again. I went back inside. A bunch of cute college kids were doing their laundry and chatting. They were mostly white females and black males, and clearly very happy to be together. It was nice to be on the periphery of such a warm crew; like sitting near a campfire.

Then a scraggly hillbillyish guy came in, looked at them with a manic grin, walked all around the room, loudly slammed a top-loader lid, and stormed out.

Light nervous laughter. "That was random," one of the kids said.

Then the guy came back in the door with a thick branch in his hand.

One of the young black men said something appropriately inappropriate. The ridiculous person left. One of the kids called the police, who drove around but didn't find the guy. I wonder if he ever went back to prison.
Posted by Aaron White at 4:26 PM No comments:

Back from Montreal after our second visit. Montreal makes me feel like a kid in Chattanooga again, in a way that I doubt Chattanooga could. The buildings loom so high they make me feel small. Moreover, Francophone culture is just different enough from what I'm accustomed to that it makes me slightly bewildered and curious, like adult culture does to kids. I found it a pleasant sensation.

Speaking of bewildering but pleasant sensations, we just saw that new Neon Genesis Evangelion movie, the first of a planned quartet. At first I was a bit underwhelmed (having watched the original show to death, do I really need to see a slicked-up rehash?) but by the end I rather liked it. The original show (which involved teenagers piloting giant robots a.k.a. Eva units against giant monsters a.k.a. Angels) often veered into rather typical (for the giant robot a.k.a. mecha genre) monster-of-the-week stuff in which the story is, essentially, monster shows up, kids struggle to overcome it, kids heroically succeed. At its most interesting, though, the show portrayed the struggle in less sanitized-for-TV-heroics fashion. Children screaming in agony, viscera gushing from monsters and robots in full-on body horror. The mecha served as objective correlatives for puberty and its accompanying indignities, while easy power fantasies were short-circuited by fear and agony. The new movie focuses on these elements, and the final note of heroism is hard-earned, affirmative without being triumphalist.

Anime fans (at least Western ones) love to whine about how whiny Shinji, the put-upon protagonist, is, but Shinji has good reason to complain. Some anime that followed Eva tried to feature protagonists that were like Shinji only less whiny, but Eva trumps them by making Shinji even whinier. The story is stripped down to a boy struggling against internal and external problems, struggling against his nature, inclination and circumstances to find some path to heroism.

One thing I liked about the dub: the iconic character Rei Ayanami was voiced, in the TV dub, by Amanda Winn, who made Rei, an unapproachable blue-haired girl, seem mysteriously alluring. The new actress, Brina Palencia, makes her sound emotionally flat; without emotional affect, as William Burroughs described fixing heroin addicts. I can tell without looking that there's copious whining about this on anime messageboards, but while a mysteriously alluring girl was the Rei Ayanami I enjoyed in the 90s, today Rei as idiot savant makes more sense, given what we come to know of her. Emotionally stunted Rei works for me.

And now, some Montreal photos. My new phone's camera is the digital equivalent of pinhole camera, which may have some nostalgia value in thirty years. 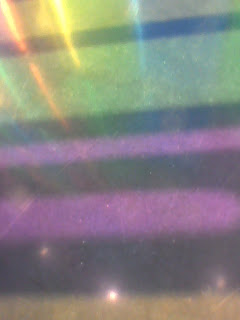 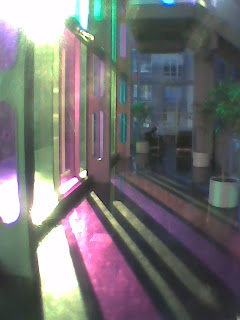 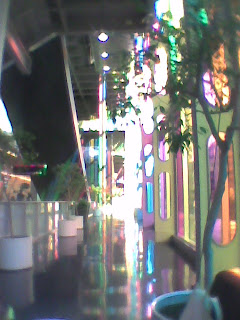 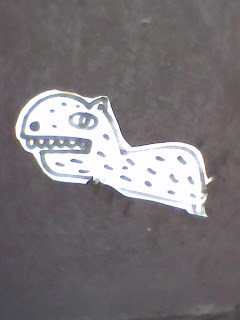 I saw this little guy from the taxi and had to catch a picture of him at my earliest opportunity. 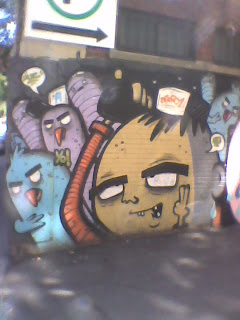 This is what I think of when I think of Montreal. Excuse the terrible cropping, but the sidewalk was busy. 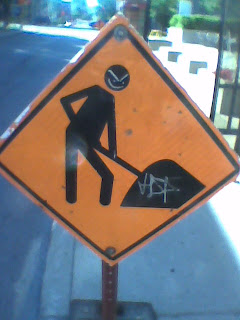 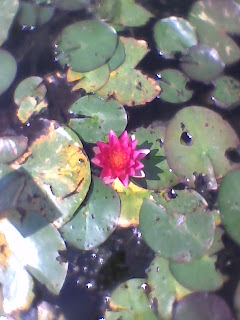 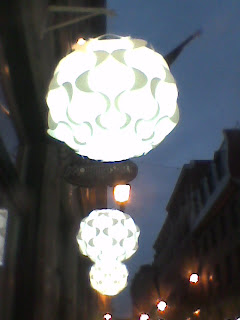 Montreal has paper lanterns. This was not the exterior of NOOBOX, a noodle chain my Wife fixated on, but both NOOBOX and these lanterns speak to the Chinatown element of Montreal. 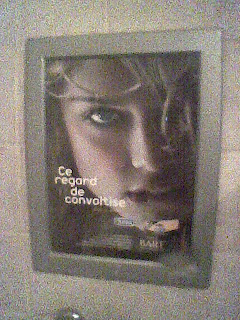 As a rule of thumb, the better the Montreal restaurant, the more audacious the condom ads in the Men's Room. The model in this ad appears to be 16, so you know my goat cheese tart and turnip soup were excellent. 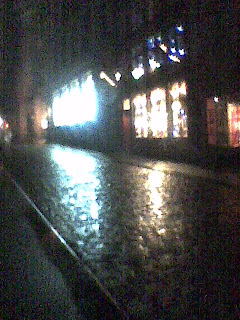 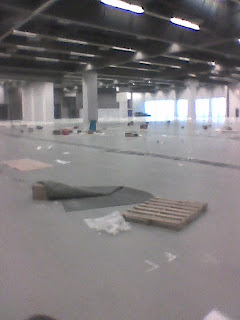